The roots of the nation’s current inability to control the pandemic can be traced to mid-April, when the White House embraced overly rosy projections to proclaim victory and move on.

Each morning at 8 as the coronavirus crisis was raging in April, Mark Meadows, the White House chief of staff, convened a small group of aides to steer the administration through what had become a public health, economic and political disaster.

Seated around Mr. Meadows’s conference table and on a couch in his office down the hall from the Oval Office, they saw their immediate role as practical problem solvers. Produce more ventilators. Find more personal protective equipment. Provide more testing.

But their ultimate goal was to shift responsibility for leading the fight against the pandemic from the White House to the states. They referred to this as “state authority handoff,” and it was at the heart of what would become at once a catastrophic policy blunder and an attempt to escape blame for a crisis that had engulfed the country — perhaps one of the greatest failures of presidential leadership in generations.

Over a critical period beginning in mid-April, President Trump and his team convinced themselves that the outbreak was fading, that they had given state governments all the resources they needed to contain its remaining “embers” and that it was time to ease up on the lockdown.

In doing so, he was ignoring warnings that the numbers would continue to drop only if social distancing was kept in place, rushing instead to restart the economy and tend to his battered re-election hopes.

Casting the decision in ideological terms, Mr. Meadows would tell people: “Only in Washington, D.C., do they think that they have the answer for all of America.”

Inside the Failure: 5 Takeaways on Trump’s Effort to Shift Responsibility
July 18, 2020 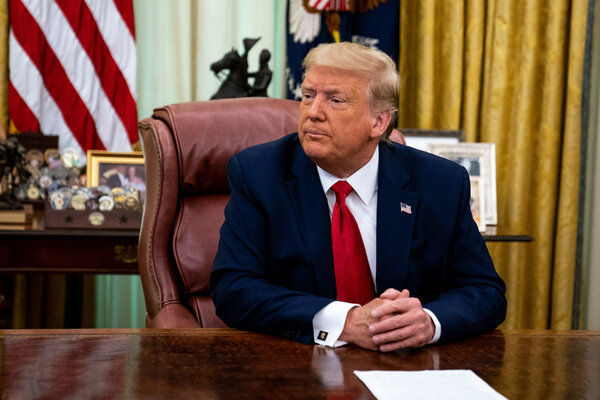 For scientific affirmation, they turned to Dr. Deborah L. Birx, the sole public health professional in the Meadows group. A highly regarded infectious diseases expert, she was a constant source of upbeat news for the president and his aides, walking the halls with charts emphasizing that outbreaks were gradually easing. The country, she insisted, was likely to resemble Italy, where virus cases declined steadily from frightening heights.

On April 11, she told the coronavirus task force in the Situation Room that the nation was in good shape. Boston and Chicago are two weeks away from the peak, she cautioned, but the numbers in Detroit and other hard-hit cities are heading down.

A sharp pivot soon followed, with consequences that continue to plague the country today as the virus surges anew.

Even as a chorus of state officials and health experts warned that the pandemic was far from under control, Mr. Trump went, in a matter of days, from proclaiming that he alone had the authority to decide when the economy would reopen to pushing that responsibility onto the states. The government issued detailed reopening guidelines, but almost immediately, Mr. Trump began criticizing Democratic governors who did not “liberate” their states.

Mr. Trump’s bet that the crisis would fade away proved wrong. But an examination of the shift in April and its aftermath shows that the approach he embraced was not just a misjudgment. Instead, it was a deliberate strategy that he would stick doggedly to as evidence mounted that, in the absence of strong leadership from the White House, the virus would continue to infect and kill large numbers of Americans.

He and his top aides would openly disdain the scientific research into the disease and the advice of experts on how to contain it, seek to muzzle more authoritative voices like Dr. Anthony S. Fauci and continue to distort reality even as it became clear that his hopes for a rapid rebound in the economy and his electoral prospects were not materializing.

Mr. Trump had missed or dismissed mounting signals of the impending crisis in the early months of the year. Now, interviews with more than two dozen officials inside the administration and in the states, and a review of emails and documents, reveal previously unreported details about how the White House put the nation on its current course during a fateful period this spring.

Judd Deere, a White House spokesman, said the president had imposed travel restrictions on China early in the pandemic, signed economic relief measures that have provided Americans with critical assistance and dealt with other issues including supplies of personal protective equipment, testing capacity and vaccine development.

“President Trump and his bold actions from the very beginning of this pandemic stand in stark contrast to the do-nothing Democrats and radical left who just complain, criticize and condemn anything this president does to preserve this nation,” he said.

At a briefing on April 10, Mr. Trump predicted that the number of deaths in the United States from the pandemic would be “substantially” fewer than 100,000. As of Saturday, the death toll stood at 139,186, the pace of new deaths was rising again and the country, logging a seven-day average of 65,790 new cases a day, had more confirmed cases per capita than any other major industrial nation.

The president had a decision to make.

It was the end of March and his initial, 15-day effort to slow the spread of the virus by essentially shutting down the country was expiring in days. Sitting in front of the Resolute Desk in the Oval Office were Drs. Fauci and Birx, along with other top officials. Days earlier, Mr. Trump had said he envisioned the country being “opened up and raring to go” by Easter, but now he was on the verge of announcing that he would keep the country shut down for another 30 days.

“Do you really think we need to do this?” the president asked Dr. Fauci. “Yeah, we really do need to do it,” Dr. Fauci replied, explaining again the federal government’s role in making sure the virus did not explode across the country.

Mr. Trump’s willingness to go along — driven in part by grim television images of bodies piling up at Elmhurst Hospital Center in New York City — was a concession that federal responsibility was crucial to defeating a virus that did not respect state boundaries. In a later Rose Garden appearance, he appeared resigned to continuing the battle.

“Nothing would be worse than declaring victory before the victory is won,” Mr. Trump said.

But even as the president was acknowledging the need for tough decisions, he and his aides would soon be looking to do the opposite — build a public case that the federal government had completed its job and unshackle the president from ownership of the response.

The hub of the activity was the working group assembled by Mr. Meadows, who had just taken over as chief of staff.

Joe Grogan, the domestic policy adviser, had come around to Mr. Trump’s view that the reaction to the virus was overblown, a position shared at that point by Marc Short, Vice President Mike Pence’s chief of staff and a frequent participant in the meetings. Russell T. Vought, the president’s acting budget director, was there to address the pandemic’s mounting costs.

Chris Liddell, a deputy chief of staff, and Jared Kushner, the president’s senior adviser and son-in-law, acted as the group’s procurement and supply-chain experts.

Hope Hicks, the protector of Mr. Trump’s brand, was a regular participant. Kevin A. Hassett, a top economic adviser, came at times to help assess the numbers and also participated in a 9 a.m. meeting three times a week with Mr. Meadows and Treasury Secretary Steven Mnuchin on the economic aspects of the pandemic.

Then there was Dr. Birx, the response coordinator of the coronavirus task force. Unlike Dr. Fauci, who only stopped by the White House to attend meetings, she was given an office near the Situation Room and freely roamed the West Wing, fully embracing her role as a member of the president’s team.

By mid-April, Mr. Trump had grown publicly impatient with the stay-at-home recommendations he had reluctantly endorsed. Weekly unemployment claims made clear the economy was cratering and polling was showing his campaign bleeding support. Republican governors were agitating to lift the lockdown and the conservative political machinery was mobilizing to oppose what it saw as constraints on individual freedom.

At the meetings in Mr. Meadows’s office, the issue was clear: How much longer do we keep this up?

To answer that, they focused on two more questions: Had the virus peaked? And had the government given the states the tools they needed to manage the remaining problems?